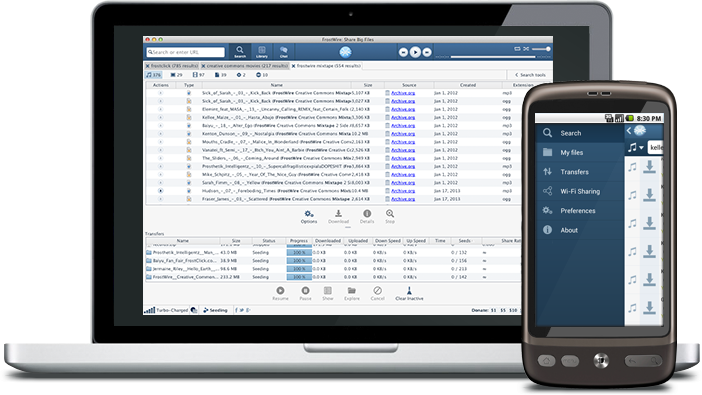 FrostWire, a BitTorrent client, is a collaborative effort from hundreds of Open Source and freelance developers from around the world. In late 2005, concerned developers of LimeWire’s open source community announced the start of a new project fork “FrostWire” that would protect the developmental source code of the LimeWire client. The developers of FrostWire give high regard and respect to the GNU General Public License and consider it to be the ideal foundation of a creative and free enterprise market. FrostWire has evolved to replace LimeWire’s BitTorrent core for that of Vuze, the Azureus BitTorrent Engine, and ultimately to remove the LimeWire’s Gnutella core to become a 100% BitTorrent client that is simple to use.

FrostWire allows any individual to share his/her content to millions of people right from his/her computer without any cost thanks to the BitTorrent P2P network. In Addition, every copy of FrostWire is a self-contained smart search engine that crawls the BitTorrent network able to find the rarest of files indexed by .torrent files available on the internet. As of FrostWire 5, the software now counts with a powerful media Library that allows you to organize and find the media files in your computer, aggregates Internet radio stations and support for audio playback in the most popular audio formats today.