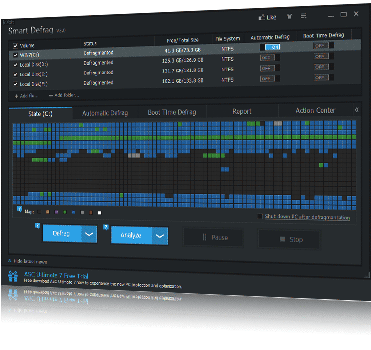 Smart Defrag is a free tool that provides extremely fast and efficient defragmentation to your hard drives intelligently for faster file loading and high disk performance. With “install it and forget it” feature, Smart Defrag  works automatically and quietly in the background on your PC, keeping your hard disk running at its top speed. Using IObit’s latest defrag engine and the new “Boot Time Defrag” technology, Smart Defrag has not only the world’s fastest defragmenting speed but also the most advanced defragmenting ability. It’s been specially designed for modern, large hard drives, which eliminates the long waiting time.

Smart Defrag doesn’t just provide simple defragmentation. It also streamlines your file system, places the frequently used files and directories into the fastest area of the disk, enabling your computer to run at top speed with the most stability.  The program also includes a new “Boot Time Defrag” technology which allows you to defrag files during the system boot process, while these files cannot be defragged or are not safe to move after the system is already boot-up.